Pregnancy and Methadone: Possible Benefits and Potential Dangers of Taking Methadone While Pregnant

Many pregnant women who are abusers or addicts of opioids both illicit and prescription often turn to methadone treatment as a much safer alternative to continued drug use or stopping opioid use altogether. According to the NIDA, “Methadone has been the standard of care for the past 40 years for opioid-dependent pregnant women.”

However, like all pharmacological treatments, the use of methadone by pregnant women has its benefits and drawbacks. Methadone can be potentially dangerous for pregnant women and their unborn children, but it is important to understand all the facts in order to make an informed decision about your care needs.

Possible Benefits of Methadone During Pregnancy

Most women who could possibly benefit from methadone use during pregnancy are those who are already addicted to harmful opioids and need to be regulated in their opioid intake. They are often not able to go off the drugs completely, like many individuals in methadone maintenance treatment, and therefore, they will need to be managed on methadone (usually for a few months but even years or longer). This is a long-used treatment for opioid addicts during their pregnancies as well as other times in their lives and it has many benefits.

According to the CDC, the benefits of methadone include: 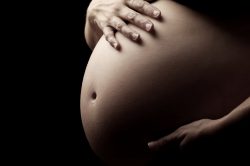 Methadone treatment is a safe alternative for pregnant women in active addiction to other more dangerous opiate drugs.

Many of these benefits also compare to the drawbacks of continued opioid abuse (whether the individual was abusing illicit opioids like heroin or opium or prescription ones like hydrocodone, oxycodone, fentanyl, etc.). Also methadone is much safer than intravenous drug abuse which is common among heroin and other types of opioid abusers.

A study from the NCBI states, “Effective medical maintenance treatment with methadone has the same benefits for pregnant patients as for patients in general” while also “reducing fluctuations in maternal serum opioid levels, so it protects a fetus from repeated withdrawal episodes.”

However, the complications that may be caused by methadone use during pregnancy are important to consider as well. Methadone is still a drug that can affect the fetus by passing through the placenta, and it can have its effects on the pregnant woman as well.

Potential Dangers of Methadone Use During Pregnancy

Methadone use can potentially be dangerous during pregnancy. One of the most common and immediate issues doctors face with children who were exposed to heroin while in the womb is NAS or neonatal abstinence syndrome. This occurs when the baby becomes dependent on heroin along with the mother. It can cause many of the symptoms that occur in adult withdrawal episodes from heroin.

According to the NIDA, “Infants exposed to methadone during pregnancy typically require treatment for NAS as well.” This means that the baby will need to be hospitalized for a time and treated with morphine to relieve the symptoms, including:

Some of the symptoms are similar to those common in adult opioid withdrawal episodes while others are not. And, for babies suffering from NAS, there is a possibility of death if they are not properly treated, unlike how most adults are usually relatively safe in the event of withdrawal from opioids.

Low birth weight can also lead to feeding issues and other problems which can take time to remedy after the baby is born.

Other Issues Associated with Methadone Use During Pregnancy

These issues are all “common obstetrical complications among women addicted to opioids,” so it is important to note that those who abuse methadone and other opioids during pregnancy are in danger of these issues occurring. However, with stable methadone dosing at a healthy level, they can usually be avoided.

Also methadone dosing must be stable and not be diminished during pregnancy in order to be safe. CESAR states, “Pregnancy complications [may occur] if users reduce dosage levels during pregnancy” as this could negatively affect both the mother and child and put them in danger of withdrawal and other issues.

Is Taking Methadone When Pregnant Safe?

Methadone can be safe when dosed correctly and, as it should be noted during National Birth Defects Awareness Month, the birth defects that can be caused by methadone and other opioid abuse are usually avoided by controlled methadone use and strict care during the NAS period for the infant. However, like all medications, methadone has its dangers, and you should consider all of your options before going on any treatment plan during your pregnancy.