Methadone is available under a variety of brand names that have different compounding structures with most being intended for oral use only. Methadone hydrochloride tablets are designed to be swallowed intact while others may be dissolvable in liquid and liquid forms of methadone may be available in ready-to-drink solutions or concentrates.

Snorting drugs to intensify or rapidly experience their effects has become commonplace among abusers with 1 out of every 10 abusers of opioid pharmaceuticals engaging in these dangerous behaviors. According to the NCBI,” the rate of delivery of drug to the brain directly correlates to the abuse potential of the drug and intranasal along with other non-oral routes of administration are expected to deliver the drug to the brain at a much faster rate than oral administration.”

The Dangers of Snorting Methadone 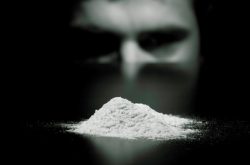 Although often in liquid form, Methadone can also be snorted as a powder.

Snorting methadone pills involves crushing the pills into a fine powder to inhale through the nasal passages. Methadone also comes in a powder forms for compounding purposes, but, the availability on the street is limited so, methadone tablets remain the most common forms of methadone being snorted. These pills are manufactured using binders or fillers such as such as lactose monohydrate, magnesium stearate, microcrystalline cellulose and silicon dioxide which are less soluble than the methadone and make it difficult for the drug to be easily absorbed through the membranes.

Since a majority of the methadone snorted ends up dripping slowly down the throat cavity anyway, abusers risk repeating the behaviors, using higher doses or more frequently and overdosing. Infections and damages to the nasal cavity and throat are likely with the added risks of lung inflammation or inhalational pneumonitis, and a multitude of physical impairments from the toxicity of the drugs. The CDC reports that “In one study, four in ten overdose deaths involving single prescription painkillers involved methadone, twice as many as any other prescription painkiller.”

The Snorting Dangers of Methadone’s Half-life

Methadone is a synthetic opioid with a long elimination half life of 8 to 59 hours compared to opoids such as morphine or heroin which have a predictable half life of around 4- 6 hours. While methadone’s beneficial properties are able to reduce withdrawals and cravings for other opioids 24 hours or more with peak analgesic effects lasting up to 8 hours, the effects on the respiratory and cardiovascular systems can persist much longer.

Snorting methadone is dangerous because it has a high affinity to the opioid receptors that control breathing and heart rate. It may appear that the pain, euphoria, or sedation effects of the methadone have worn off when in actuality, the stored methadone in bodily tissues and blood levels continue to enact their power to depress the central nervous system.

Intranasal use of methadone can cause sudden death as high amounts of the chemical reach the brain quickly or can lead to respiratory and cardiovascular system failures later, which sadly, is often the case. Consuming other substances within the time frame of methadone’s long-half life amplifies the dangers.