In spite of its use as an opiate addiction treatment, methadone abuse practices follow the same methods and routines used with addictive substances, one of which is snorting. While commonly known as an opiate addiction treatment medication, methadone has also been used as an effective treatment for conditions involving moderate to severe pain symptoms for over 50 years, according to the Substance Abuse & Mental Health Services Administration.

As an addiction treatment, methadone works well at helping addicts better manage the withdrawal and drug cravings that come with long-term opiate abuse. Methadone works equally well at managing pain symptoms. As with any prescription narcotic drug, abusing methadone all but cancels out the therapeutic benefits of the drug regardless of its intended use.

In general, methadone is specifically formulated to produce measured or controlled effects. Consequently, abusing methadone in oral or tablet form does little in terms of producing a “high” effect, whereas snorting can intensify the drug’s effects. In the process, users open themselves up to a number of dangerous consequences.

The dangers of snorting methadone run the gamut, affecting the body, the mind, and ultimately threatening the user’s life. As with any form of drug abuse, the longer a person continues to snort methadone the greater the risk of physical and psychological damage, not to mention the high likelihood of overdosing.

We can help you find methadone treatment. Call 800-530-0431Who Answers? toll free for help today.

As a pain treatment, methadone exists as a generic drug making it considerably less expensive than other types of prescription painkillers. For insurance purposes, this low cost factor has made methadone the preferred pain treatment medication.

According to the New York State of Alcoholism & Substance Abuse Services, only 72 percent of all methadone dispensed is actually used for treatment purposes, while as much as 10 percent is snorted illegally. As of 2009, doctors wrote an estimated two million prescriptions for methadone as a treatment for pain. While the FDA has issued warnings regarding this drug’s abuse potential, methadone prescription rates have continued on unaffected. 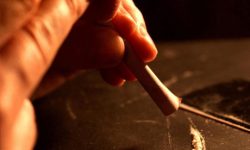 It is very dangerous to snort methadone or take it in any way other than as prescribed.

Methadone is a synthetic, opiate drug that’s formulated to produce moderate, long-acting effects. These properties account for the drug’s effectiveness as a pain treatment, delivering up to 12 hours of relief from pain symptoms.

Methadone’s slow-acting formula enables the drug to build-up in the body while producing continuous pain relief as well as relief from withdrawal symptoms. In effect, methadone stores up in the body’s tissue and fat cells as well as inside the liver. From there, the drug is slowly released back into the bloodstream, which works to prolong its therapeutic effects.

Unfortunately, this drug’s therapeutic benefits directly tie in with the dangers that come with snorting methadone.

Methadone’s therapeutic effects directly interact with the central nervous system, binding to opiate receptors in the brain and altering the body’s perception of pain. These processes operate according to a time-release mechanism.

Snorting methadone overrides this built-in mechanism, allowing the full dose of the drug to enter the blood stream through the nasal tissues. Users experience the full effects of the drug almost immediately.

Absorbing this much methadone all at once is not unlike ingesting an addictive opiate substance, such as heroin or OxyContin. Under these conditions, the addiction cycle takes hold with full force, starting with physical dependency and eventually leading to the psychological dependency that characterizes addiction.

As some formulations of methadone come in extended-release versions, snorting methadone in this form only works to accelerate the damaging effects of the drug.

Methadone comes in tablet, liquid and diskette tabs. Since opiate addiction treatment programs typically administer the drug in liquid and/or diskette tabs, snorting methadone requires the tablets, which must be ground up into powder form.

Though tablets contain mostly methadone, other ingredients, such as starch, microcrystalline cellulose and magnesium stearate are also included for consistency purposes. These added ingredients can cause considerable damage along nasal passageways in the form of lesions and eventual respiratory infections.

Methadone carries a side effect profile when used as prescribed. When snorting methadone, side effects come on that much stronger, sometimes bringing about serious medical conditions. Side effects commonly experienced from methadone include –

Methadone’s effectiveness as a treatment medication has a lot to do with the time it takes the body to metabolize the drug. Methadone has a long half-life that can run anywhere from eight to 59 hours depending on a person’s metabolism rate.

In cases where a person takes other types of medications or abuses other types of drugs, methadone metabolism rates can change dramatically. When snorting methadone, the dangers associated with drug interactions are many.

As with form of opiate abuse, the risk of overdose and death becomes the most serious and likely danger associated with snorting methadone. Methadone exists as one of the four most deadly medications on the market, along with hydrocodone, oxycodone and fentanyl.

According to the Centers for Disease Control & Prevention, fatality rates associated with methadone abuse include –

Methadone’s ability to slow central nervous system functions coupled with its long-half life makes for a deadly combination that can quickly result in overdose. Snorting methadone not only delivers massive amounts of the drug into the body all at once, but also causes a rapid buildup of methadone in system. These combined factors carry an incredibly high potential for overdose, and even death.

We can help you quit abusing methadone. Call 800-530-0431Who Answers? toll free for help finding treatment.