Can You Shoot Methadone?

Methadone may be prescribed to treat chronic and severe pain and as an opioid agonist therapy in opioid treatment programs (OTPs) for detox and maintenance. According to the DEA, methadone,”is currently marketed as oral concentrate (10 mg/ml), oral solution (5 and 10 mg/5ml), tablet (5, 10, and 40 mg), injection (10mg/ml) and powder (50, 100, and 500 mg/bottle for prescription compounding).”

Tablets are the most frequently prescribed forms of methadone in the U.S. that include other variant ingredients such as lactose monohydrate, magnesium stearate, microcrystalline cellulose and silicon dioxide. Because the liquid and powder forms are more pure, the likely-hood of shooting these methadone products is increased.

Comparing Methadone to Other Opioids 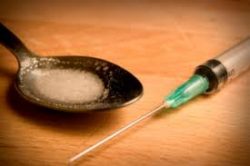 As with other opioid drugs, the propensity to shoot methadone may be for the added intensity of effects or to elicit a rapid “high”, but, methadone has different mechanisms of action compared to short acting opioids that make this route of administration extremely dangerous. In pain management therapies, intramuscular injection of methadone may provide more analgesic effects than taken orally, but, outside of this context, shooting methadone is never wise.

As a pain medication, methadone has a comparable analgesic equivalency to morphine although it has a much slower onset of action. It is not intended for short term pain conditions, as a break through pain medication, or to be taken by an opioid naïve person because of its powerful effects on the respiratory and cardiovascular systems. According to the DEA, “Pain relief from a dose of methadone lasts about 4 to 8 hours, but the drug may stay in the body for 8 to 59 hours.”

The long-acting properties of methadone are highly beneficial in relieving cravings and withdrawals from other opioids for the 24 hour intervals between regulated doses in an OTP treatment, but, it’s these long-acting properties that propose methadone’s highest dangers. Unlike other opioids that are metabolized and eliminated from the body within a few short hours, methadone build ups can reach toxic levels with peak respiratory depressant effects occurring much later and persisting longer.

Shooting methadone may elicit an intense and rapid “high”, but, it has a high affinity to the opioid receptors that decreases breathing and heart rate. Even a small dose of methadone in the shot can result in sudden overdose and death from a prior day’s dose. Some individuals may be more vulnerable than others due to compromised health or poly-substance abuse.

Another danger of shooting methadone is the variant chemicals that can clog veins and arteries, cause bacterial infections and arterial damages. Heart, lung, and immunological diseases are common among IV users with multiple risks to other organs and systems. Communicable diseases such as HIV, AIDs, hepatitis, and tuberculosis run rampant in IV abuser populations and it only takes one use of a dirty needle or the sharing of other paraphernalia to alter your life forever.