5 Signs Methadone Treatment is Right for You

Opiate effects on the brain leave many addicts at a loss as to how to break an addiction to the drug. As the brain grows more dependent on opiates, drug cravings become stronger. Attempts to reduce or stop drug use are met with uncomfortable withdrawal effects that can quickly overwhelm a person’s resolve.

More oftentimes than not, addicts engage in ongoing drug use in an attempt to ward off distressing withdrawal effects as much as to try to get “high.” The addiction process holds a person captive inside a vicious cycle of physical and psychological dependency. Methadone treatment is designed to break this cycle and help recovering addicts regain control of their lives.

For some people, the hardest part about breaking opiate addiction is making it through the detox phase. For people with a longtime drug history, both the detox phase and the following months pose as seemingly insurmountable barriers. According to the National Drug Intelligence Center, methadone has a well-established track record as a treatment for opiate detox and for maintaining long-term abstinence.

If you or someone you know suffers from one or more of the following symptoms, methadone treatment help may provide you with the support needed to finally beat an opiate addiction. 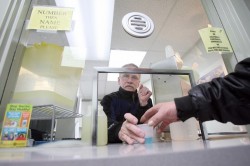 Methadone is administered at specialized clinics and in controlled doses.

As a synthetic opiate medication, methadone greatly reduces the degree of drug cravings a person experiences, whether detoxing or well into the recovery process.

Withdrawal effects develop whenever a person reduces dosage amounts or stops using altogether. These effects result from the body’s attempts to restore chemical processes back to normal.

Methadone works by mimicking opiate effects without producing a “high” effect. This mechanism of action also works to reduce the severity of withdrawal effects for as long as a person remains in treatment.

Over time, it becomes difficult to function effectively at work and at home. With methadone treatments, a person can regain normal cognitive functions while weaning off the effects of opiates.

Methadone’s opiate-like effects act as a buffer in terms of allowing the body to heal while supporting weakened chemical processes.

For people who’ve used opiates for a long time, withdrawal effects often persist long past the detox stage. Under these conditions, the risk of relapse remains high as users attempt to self-medicate ongoing withdrawal symptoms. Methadone works well as a long-term treatment approach and can greatly reduce the level of discomfort a person experiences throughout the recovery process.