The Difference Between Methadone Treatment & Suboxone

With more than 40 years of successful history behind it, methadone has been proven effective in the treatment of opioid dependency by reducing the cravings, withdrawals, IV use, crime, and negative behaviors associated with opioid addictions.

In light of the epidemic rise of prescription drug abuse and methadone’s increased involvement in overdose occurrences, Suboxone was approved by the FDA in 2002 and made available as an alternative medication for opioid addiction treatments with these same capabilities, but, less potential for abuse.

Studies show that addicts who switch from illicit opiate use to methadone are able to sustain a steady state of functioning when adequate dosages are administered daily. Methadone is a long lasting opioid agonist that slowly binds to opiate receptors producing similar effects to other opiates, but, without the same euphoria unless it is abused. By occupying these receptors for 24 hours or longer, the effect of other opiates if used, are blocked.

Methadone maintenance treatment for opiate dependency is controversial to some because methadone is a synthetic opioid with a potential to cause tolerance, dependency, and addiction. Methadone abuse and diversions have raised concerns because it has been linked to a growing number of overdoses. According to the Centers for Disease Control and Prevention, “The rate of overdose deaths involving methadone in the United States in 2009 was 5.5 times the rate in 1999.” 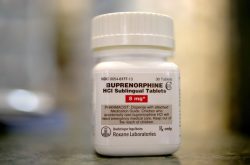 Suboxone is a combination of buprenorphine and naloxone.

Suboxone is a combination of buprenorphine, a partial opioid agonist and Naloxone, an opioid antagonist. It is a recommended alternative when methadone use is contraindicated. Suboxone comes in the form of a film which must be dissolved under the tongue. Chewing the medication will have no effects and snorting or injecting Suboxone is out of the question.

Buprenorphine works like methadone, but, to a lesser degree. It has strong binding potential to the opioid receptors in the brain, but, only attaches to a select few. Because buprenorphine partially occupies receptors, opiate use is discouraged by the reduced level of euphoria and addiction potential.

Like methadone buprenorphine has a long half-life of 24 – 60 hours and can cause withdrawals if suddenly discontinued. But, unlike methadone, when abused in high amounts, it has a limit to the effects it will produce known as the “ceiling effect” which limits its abuse potential, and decreases the risk for overdose.

Naloxone is an opiate agonist which reverses the effects of opiates and precipitates withdrawals when enough amounts are absorbed into the brain. The inclusion of Naloxone discourages the abuse of Suboxone because when taken sublingually, the Naloxone absorption is minimal, if someone tries to dissolve and inject the medication, the Naloxone will immediately react causing acute withdrawal syndrome.