Does Methadone Still Have a Place in Addiction Treatment?

Methadone is a narcotic pain reliever that is used together with medical supervision and counseling for treatment of narcotic drug addiction. It is similar to synthetic drugs such as heroin, morphine, codeine, or other substances derived from the opium plant. When taken once a day, methadone eases opiate withdrawal for 24 to 36 hours, decreasing the chance of relapse.

Alternative medicinal treatments have been discovered since the inception of the use of methadone for opioid addiction, but methadone is still very much in use, and there is little evidence that its efficacy is diminishing or that it will be completely replaced by another pharmaceutical any time soon. In fact, the Centers for Disease Control and Prevention have said that methadone maintenance treatment is the most effective treatment for opiate addiction.

Methadone blocks the “high” brought on by drugs such as heroin, by working on parts of the brain and spinal cord and prevents the euphoric rush that such drugs create. A primary benefit of the drug is its ability to help reduce cravings and withdrawal symptoms caused by opiate use. This allows an addict to avoid the physical and psychological highs and lows caused by changing levels of opiates in the blood, in turn decreasing the chance of relapse. In some cases of opiate addiction, it can take several years of methadone treatment to help an addict recover.

Methadone maintenance treatment (MMT) is a comprehensive program that involves the long-term prescribing of methadone as an alternative to the opioid to which the patient was addicted. Central to MMT is the counseling, case management and other medical services.

Heroin which is short-acting (about three to six hours), is often injected several times a day, while in MMT, methadone is administered only once a day.

Tolerance to methadone develops slowly, so clients can be maintained in MMT indefinitely. If it is prescribed properly, methadone is considered medically safe as a treatment for opioid dependence.

A variety of studies have found that not only is methadone a cost-effective treatment for opioid addiction, but MMT is associated with a reduction in:

Methadone is a long-acting medicine; each dose remains in the body for a long time. It is for this reason that dosages should be adjusted with caution, by an addiction specialist. It can take several days after the medicine is started before the dose of methadone is fully effective.

Methadone can slow or stop your breathing, especially when you first start using it, or when your dose is changed. Never use the drug in larger amounts or for longer than prescribed. It can be habit-forming, even at regular doses. For this reason, you should never share this medicine with anybody, especially someone with a history of drug abuse or addiction. Keep it in a safe place, where others cannot get to it.

Aside from methadone, there are at least two alternatives to methadone for the medicinal treatment of opioid dependence: Bupernorphine and LAAM. 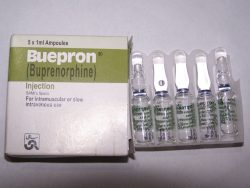 Buprenorphine is an alternative to Methadone.

Buprenorphine is a semi-synthetic narcotic substance that is 30-50 times more potent than morphine, but after extensive research, has been approved to help treat heroin and opioid dependency. The opioid effects of Buprenorphine increase with increasing doses of the drug until it reaches a plateau and no longer continues to increase with further increases in dosage. This is called the “ceiling effect.” Thus, Buprenorphine carries a lower risk of abuse, addiction, and side effects compared to full opioid agonists. And unlike the other treatment drugs, Bupernorphine produces far less respiratory depression and is thought to be safer in the event of an overdose. In addition, it does not produce significant levels of physical dependence or discomforting withdrawal symptoms; so discontinued use is easier than methadone.

Some side effects that may occur with the use of Buprenorphine are:

In 1994 the FDA approved L-alpha-acetyl-methadol (LAAM) as a Schedule II drug for use in the treatment of opioid addiction. LAAM has longer lasting effects than methadone, and instead of daily visits to treatment, addicts may only need to take the drug three times a week. Like methadone, LAAM does not produce euphoric effects; however, patients may initially be more anxious and need more counseling and support when receiving LAAM than they would with methadone because most are not familiar with LAAM. Users may also experience to a number of side effects such as abnormal liver functioning, rashes, nausea, and elevated blood pressure.

Some question whether using any of these drugs just results in trading one addiction for another. This is not true. When being treated for addiction with methadone, buprenorphine or LAAM, these drugs are administered in precise doses, by an addiction specialist, and medicinal treatment is accompanied by counseling as well.

In order to be sure that LAAM is used safely, a level of dosage needs to be established and symptoms of dose accumulation should be monitored. These symptoms include:

The protocol for stopping treatment with LAAM is patient-specific. Because LAAM has a long half-life, withdrawal symptoms will have a delayed onset and will probably not be as severe as with opiate medications.

However, the use of LAAM is being phased out because of safety concerns, which further ensures that methadone will remain in use as a treatment for opioid addiction for the forseeable future.