Is Methadone Safe for Treating Addiction to Oxycodone?

Oxycodone, commonly used to treat conditions involving moderate to severe pain, exists as one of many prescription pain relief medications, also known as opiates. Its status as a legal prescription drug makes oxycodone no less addictive than illegal narcotic drugs like heroin. It is highly addictive, and many people who fall victim to this may wonder: “is methadone safe for treating addiction to oxycodone?”

According to the Centers for Disease Control & Prevention, over 12 million people reported using prescription pain relief medications for recreational purposes in 2010. Compared to other commonly abused drugs, prescription opiates rank as the second most abused category of drugs with alcohol ranked number one.

Methadone’s use as a treatment for opiate addiction is commonly associated with heroin abuse. As most all opiates can have damaging effects on the body, methadone works equally well in treating people struggling with oxycodone addictions. Depending of the extent of the addiction, recovering addicts can take methadone on a short-term or long-term basis.

Unless synthetically made, all opiate-based drugs originate from the opium poppy plant seed, according to Harvard Health Publications. Natural extracts of opium poppy seeds include codeine, morphine and opium among others. Oxycodone exists as a synthetic derivative of natural opium-based substances. 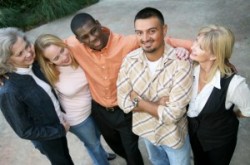 Methadone can help you safely overcome oxycodone addiction and begin a renewed, happy and healthy life.

Because oxycodone comes from the same family of drugs as heroin, morphine and codeine, it affects brain and body processes in the same way. When ingested, oxycodone binds to certain brain cell receptors and stimulates endorphin secretions throughout the brain. This process accounts for oxycodone’s effectiveness in relieving pain symptoms.

When abused, oxycodone produces a “euphoric” high effect, which can become physically and psychologically addictive over time. As addiction progresses, the brain loses its ability to secrete endorphin chemicals. In the absence of the drug, endorphin chemical levels plummet at which time opiate withdrawal effects start to develop. With long-term addiction, addicts keep using in order to avoid experiencing withdrawal.

Opiate-based drugs like oxycodone can cause long-term damage to brain chemical processes. By replacing oxycodone’s effects with a slow-acting opiate medication, it’s possible to wean addicts off the addictive effects of oxycodone. Methadone is a synthetic opiate drug that produces slow-acting effects compared to oxycodone.

This slow-acting mechanism greatly reduces the risk of addiction while at the same time relieving the persistent drug cravings and withdrawal effects addicts experience. For addicts going through oxycodone detox, methadone’s effects alleviate much of the discomfort experienced during this stage of recovery.

For many people, the fear of oxycodone withdrawal is the only thing that keeps them from entering recovery. Methadone maintenance treatment makes it possible for long-term users to have a chance at living a drug-free life. When used for maintenance purposes, methadone acts as a replacement therapy in terms of substituting the addictive effects of other drugs with methadone’s effects.

Using controlled dosage amounts, methadone maintenance keeps recovering addicts from developing a tolerance to the drug while at the same time preventing addicts from being overwhelmed from ongoing drug cravings and persistent withdrawal effects. As oxycodone addicts can easily go through several doses a day, methadone’s slow-acting effects allow for single doses per day.

Overall, the benefits of methadone treatment enable recovering addicts to resume a normal life while continuing on in the recovery process.